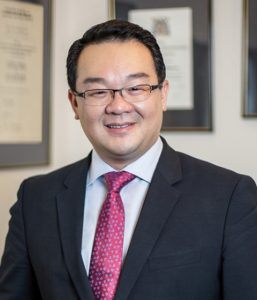 Prof. Eugene Ek is a fellowship-trained hand, elbow and shoulder surgeon, specialising in arthroscopic and reconstructive surgery of the upper extremity at the Melbourne Orthopaedic Group.

Dr. Ek grew up in Melbourne, Australia and received his Medical Degree with Honours from the University of Melbourne in 2001. He completed his internship and basic surgical training at St. Vincent’s Hospital Melbourne, and in 2008, completed a PhD in bone and tumour biology at the University of Melbourne for research into osteosarcomas, under the supervision of Prof. Peter Choong. Eugene then went on to finish his orthopaedic training in Melbourne through the Australian Orthopaedic Association (AOA) and became a Fellow of the Royal Australasian College of Surgeons (FRACS) in 2010.

Dr. Ek subsequently spent a further 3 years of subspecialist fellowship training in shoulder, elbow and hand surgery, including 12 months as an Honorary Hand Fellow at St. Vincent’s Hospital Melbourne and Dandenong Hospital under the supervision of Dr. Stephen Tham.

He then continued his training overseas, completing a 6 month fellowship in shoulder and elbow surgery at the Balgrist University Hospital, in Zurich, Switzerland under Prof. Christian Gerber and Prof. Dominik Meyer. This was followed by a further 6 month fellowship in shoulder surgery at the Harvard Shoulder Service, Massachusetts General Hospital, Boston, USA under the supervision of Dr. Jon J.P. Warner. Both these fellowships focused on advanced shoulder arthroscopy and complex reconstructive surgery of the shoulder.

Finally, Dr. Ek went on to work at the Hospital for Special Surgery (HSS), Weill Cornell Medical School in New York, where he completed a 12 month ACGME-accredited fellowship in hand, upper extremity and microsurgery. During this fellowship, he was actively involved in the care of professional athletes from several sporting teams including the New York Giants (NFL), New York Mets (MLB), New York Knicks (NBA), and PGA tour golfers. In addition, Dr. Ek gained extensive experience in complex elbow surgery, under the direction of Dr. Robert Hotchkiss.

In 2019, he was selected as the Shoulder and Elbow Society of Australia (SESA) Travelling Fellow to the Korean Arthroscopy Society (KAS). And in 2020, he was awarded the prestigious ABC Travelling Fellowship to the USA and Canada, representing the Australian Orthopaedic Association (AOA).

Dr. Ek continues to be active in both teaching and in clinical and biomechanical research. He has published over 100 peer-reviewed research articles and multiple book chapters and is a frequent presenter at national and international conferences. He has public/academic appointments at the Austin Hospital, University of Melbourne and at Dandenong Hospital, Monash University, where he holds the position of Professor (Adjunct Clinical) within the Department of Surgery, Monash University. Eugene is also actively involved in training both local and overseas surgeons and is currently a co-supervisor of the Melbourne Orthopaedic Group Shoulder/Upper limb Fellowship and also the Dandenong Hand Fellowship.

In addition, he has served on the Executive Committee of the Victorian Branch of the Australian Orthopaedic Association (AOA) as the Scientific Secretary, and currently he is on the Board of Directors of the Victorian Orthopaedic Foundation. In 2019, he graduated from a 12 month postgraduate Surgical Leadership Program (SLP18-19) at Harvard Medical School, Boston.

Watch Eugene's story which was profiled as part of the 'Victorian. And Proud of It' campaign.

Login to Prof. Eugene Ek
Reset Password
Enter the username or e-mail you used in your profile. A password reset link will be sent to you by email.